Set seductively between mountains and the sea, Cape Town flaunts its natural beauty with pride. Rising above the city, iconic Table Mountain provides the perfect plateau for panoramic views that stretch to the glittering Atlantic, botanical gardens beckon from its slopes, and the city’s long blonde beaches, backed by towering peaks, are some of South Africa’s best.

Bubbling beneath the surface is an irrepressible sense of adventure, and travelers can join in the fun with a range of outdoor activities, from hiking, biking, surfing, and paragliding to whale-watching trips and cage dives with great white sharks.

As the oldest European settlement in Africa, Cape Town has a rich and, at times, turbulent past. At Robben Island, history buffs can see where Nelson Mandela was incarcerated for 18 years. In the hinterland, elegant Stellenbosch is a Nirvana for foodies. Along the rugged coast, scenic drives slice into mountains that plunge to the sea, penguins waddle on pristine beaches, and Cape Point is part of a UNESCO World Heritage Site with one of the richest floral kingdoms in the world.

Explore the best things to do in the “Mother City” of South Africa with our list of the top tourist attractions in Cape Town. 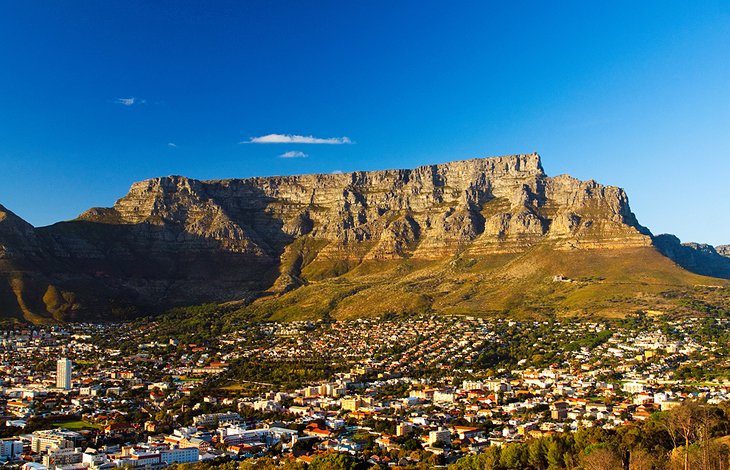 Rising 1,087 meters south of the city center, flat-topped Table Mountain is the most photographed landmark in South Africa and a constant reminder that nature is queen in this stunning seaside city. Created from massive beds of sandstone and slate, the mountain forms the northern end of the Cape Peninsula and lies within Table Mountain National Park.

The park protects an astounding diversity of plants and more than 1,470 flower species-the planet’s richest floral kingdom-as well as animals such as cute snub-nosed dassies (rock hyraxes), caracals, and baboons. Within the park, Devil’s Peak flanks the mountain on the east, and Lion’s Head on the west, while the crags known as the Twelve Apostles loom over the beach resorts on the Atlantic coast.

A layer of clouds, called the “tablecloth” frequently cloaks the mountain’s peak, but when the clouds clear, visitors can enjoy spectacular views of Cape Town and the entire Cape Peninsula from the summit. Bring a sweater as it can be cold and windy at the top. For those short on time, and energy, a revolving cableway climbs to the summit, covering the distance of 1,244 meters in seven minutes. The cableway runs daily-except in high winds, so it’s a good idea to check the website or call for current conditions before heading out. Also to avoid long lines, try booking tickets online.

At the upper station of the cableway, a café features a small viewing terrace and serves as the starting-point of three short walks, which highlight the gigantic scale of the landscape. Those wishing to summit the mountain on foot can choose between more than 350 different routes varying in difficulty. Depending on the starting-point, the climb takes between two to four hours. For superb views of Table Mountain and the best vantage point to photograph this iconic landmark, hike or drive up Signal Hill or Lion’s Head – both offer stunning views from their summits. 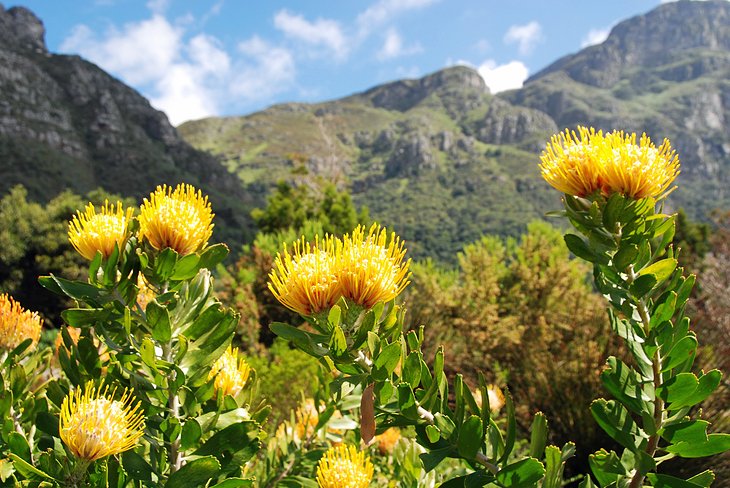 In a beautiful setting on the eastern slopes of Table Mountain, Kirstenbosch Botanical Gardens are part of the Cape Floristic Region UNESCO World Heritage site. The site was bequeathed to the state by Cecil Rhodes in 1902 and the gardens were established in 1913 to preserve the country’s indigenous flora-one of the first botanical gardens in the world with this mission.

More than 20,000 native South African plant species are collected, grown, and studied in the hilly 528-hectare nature reserve of indigenous forest and fynbos. Of particular historical interest are a hedge of wild almond-trees planted by Jan van Riebeeck in 1660 and an avenue of camphor and fig trees planted by Cecil Rhodes in 1898. The flowers, shrubs, and trees are arranged so that a show of blossoms and color brightens the gardens throughout the year.

Don’t miss the proteas; the scented garden; the impressive collection of cycads; the Sculpture Garden; and the Botanical Society Conservatory, a custom-built greenhouse with plants from arid regions. Well-marked trails thread through the wooded slopes, and the Tree Canopy Walkway provides panoramic views across the mountain-backed gardens. One of the trails leads through a ravine to the summit of Table Mountain. In summer, the gardens make an evocative venue for outdoor concerts.

Green thumbs and garden lovers should also visit Company’s Garden, an oasis of exotic trees, flowers, aviaries, and ponds in the heart of the city. While here, visitors can also explore the Iziko South African Museum and Planetarium and the Iziko National Gallery.

3. Signal Hill and the Noon Gun 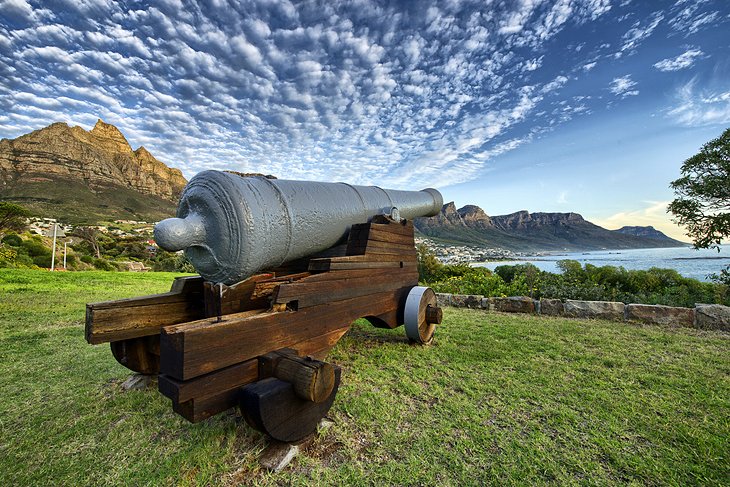 Five minutes drive west of the city center, Signal Hill offers stunning views over Cape Town, Table Bay, and the glittering Atlantic Ocean from its 350-meter summit. The hill forms the body of the adjacent Lion’s Head peak and was named for its historical use when signal flags were flown from here to send messages to approaching ships.

Many locals and visitors drive up to watch the sunset and stay to see the shimmering lights of Cape Town ignite after dark. At noon every day (except Sundays and public holidays), a cannon activated by an electronic impulse from the Observatory fires a single shot. In earlier days this “noon gun” served to give the exact time to ships anchored in the bay. Tourists are welcome to attend a free presentation on the history of the Noon Gun at the Lion Battery and then stay to watch the firing.

Those headed to the top of the hill for sunset views should take a jacket as it can be chilly after the sun dips. On busy weekends and holidays go early to score a parking spot. 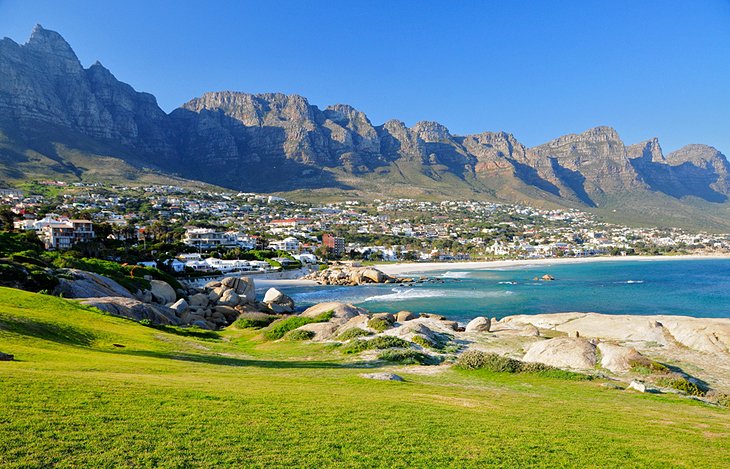 About six kilometers from the city center, the beaches of Camps Bay and Clifton lure the buff, the bronzed, and the beautiful-as well as the big bucks. At Clifton, Cape Town’s St. Tropez, some of the city’s priciest real estate overlooks four gleaming white-sand beaches flanked by smooth granite boulders and washed by sparkling, but crisp, blue seas.

First Beach is a favorite volleyball venue and offers decent surf when the conditions are right. Just south of Clifton, trendy Camp’s Bay sports another stunning beach, backed by the magnificent Twelve Apostles and the distinctive peak of Lion’s Head. People-watching is an art along this pretty palm-lined stretch as well as at the chic cafes and boutiques fringing Victoria Street – especially during weekends and holidays when locals and tourists throng here to soak up the scene. 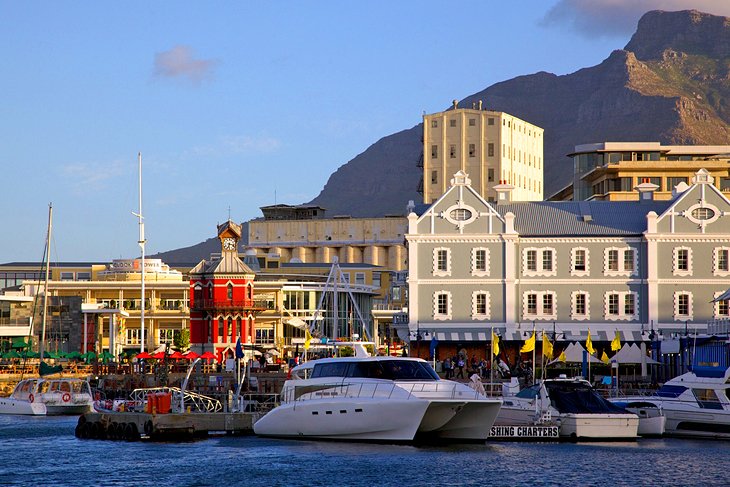 Stretching around two harbor basins, the Victoria and Alfred Waterfront is a buzzing entertainment quarter reminiscent of Fisherman’s Wharf in San Francisco. Once a scruffy fishing harbor, this reimagined waterfront district is now one of the city’s top tourist attractions, and many of the old buildings have been preserved and restored. Millions of visitors a year flock here to the shops, jazz venues, restaurants, hotels, theaters, drama school, cinemas, and museums.

Sports fans will love the Springbok Experience Rugby Museum, which traces the story of South African Rugby through interactive exhibits. Two Oceans Aquarium features more than 300 species of fish from the Atlantic and Indian oceans, in particular from the area around the Cape of Good Hope. Highlights include a touch tank, penguin encounter, predator exhibit, and diving experiences, which allow visitors to view fascinating marine creatures up close.

Trips to Robben Island leave from the Nelson Mandela Gateway on the waterfront, but anyone is welcome to explore the museum exhibits here. West of the waterfront, the trendy Green Point precinct is also home to the lovely Green Point Urban Park with its biodiversity garden as well as the Cape Town Stadium, which hosted many FIFA World Cup matches in 2010. 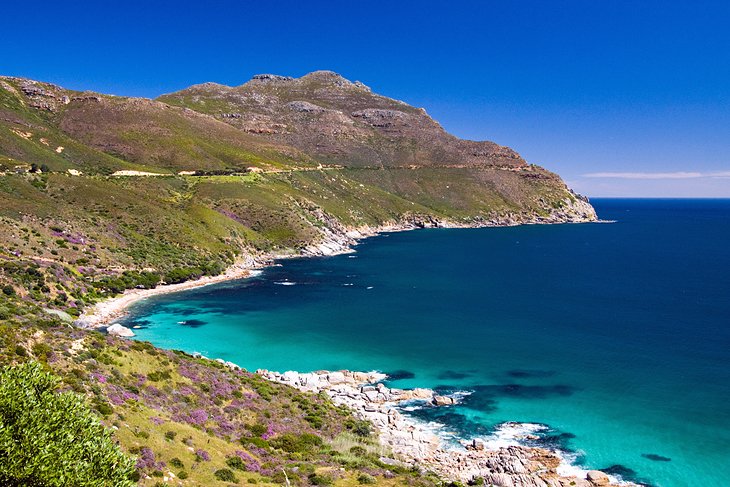 About 25 kilometers from the city center, Chapman’s Peak Drive, affectionately called “Chappies” by the locals, is one of the most jaw-dropping driving routes in the world. Cut into the sheer face of Chapman’s Peak, which plunges to the sea, this spectacular toll road snakes its way for about nine kilometers between Noordhoek and Hout Bay passing panoramic Chapman’s Peak point along the way. With 114 curves carved into the rock face, some perched more than 500 meters above the sea, this is not a route for those prone to motion sickness.

Around sunset, cars cram along the panoramic viewpoints as sightseers stake a spot to watch the sun sink while sipping a cool drink in the time-honored South African tradition known as “sundowners.” Look for southern right whales and dolphins in the sparkling Atlantic Ocean below, and drive slowly and carefully. The road was closed on and off for several years due to rockfall dangers, but it has now been stabilized and is open every day – except during severe weather events.

As well as being used as a location for TV commercials, Chapman’s Peak Drive is the setting for the popular Cape Argus Cycle Race and Two Oceans Marathon. After admiring the magnificent sea views, hungry travelers can feast on fresh fish at one of the excellent seafood restaurants in Hout Bay. 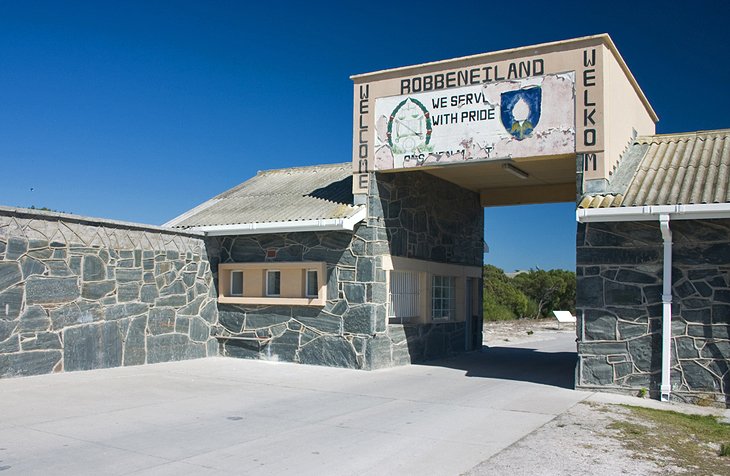 For nearly 400 years, Robben Island in Table Bay, was a brutal prison where Nelson Mandela spent 18 years in a tiny cell during the apartheid era. Today, the island is a UNESCO World Heritage Site and a must-see attraction for anyone interested in South African history. Tours to the island begin with multimedia exhibits in the museum at the Nelson Mandela Gateway on the Victoria and Alfred Waterfront before travelers board vessels to the island. The boat trip takes about 30 minutes to an hour depending on weather conditions and can be rough during big swells.

While on the island, visitors tour the maximum security prison, Mandela’s former cell, and the lime quarry where prisoners were forced to endure back-breaking labor. The interesting part about the tour is that the guides are former prisoners of Robben Island who share their experiences and offer insight into the atrocities of apartheid and the power of forgiveness.

After leaving this hellish six-square-kilometer island, Mandela said, “As I walked out the door toward the gate that would lead to my freedom, I knew if I didn’t leave my bitterness and hatred behind, I’d still be in prison.” These wise words are even more potent after a tour here.

The Cape Town Townships Tour including Robben Island, gives visitors an overview of South Africa’s past and present. The full-day small group guided tour includes a round-trip ferry ride to Robben Island, a visit to Cape Town’s District Six Museum, and the communities of nearby townships of Langa and Gugulethu. 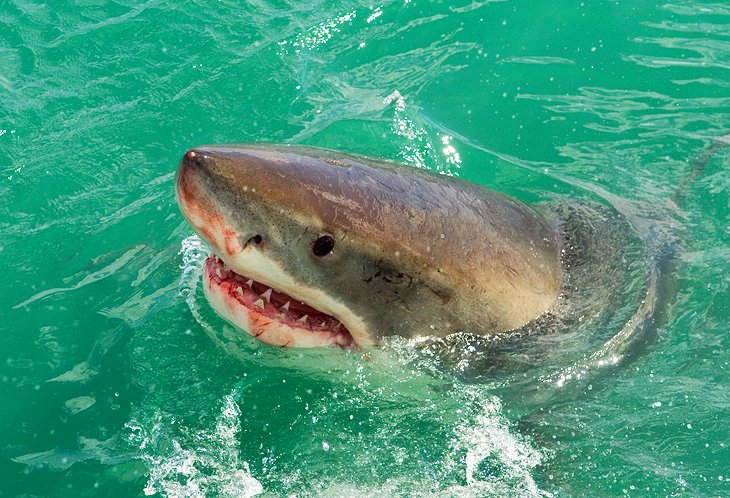 In the chilly waters off Cape Town’s coast, thrill seekers can come face-to-face with one of the ocean’s most feared predators: great white sharks. Protected by the thick bars of an iron cage, divers score a hefty dose of adrenaline as these magnificent creatures swim within inches of the bars.

Tour operators in Cape Town offer shark cage dives in areas such as Simon’s Town, Dyer Island, Mossel Bay, Seal Island, and Gansbaai, the “Great White Shark Capital of the World.” The best time to see these magnificent creatures is between April and October. No diving certification is needed since divers are enclosed in the custom-built cages, and part of the funds go towards shark research and conservation.

Those who prefer to appreciate these awe-inspiring creatures from a distance can watch all the excitement from the boat. Seal, dolphin, penguin, and whale-watching tours are also available for more timid animal lovers.

Whatever your preference for travel, Cape Town has something for everyone.